Mount Rushmore, one of the most incredible sights in the entire world, yet one that doesn't draw anywhere near the number of people you would expect for such a famous and iconic location. Why is that, you ask? Well, it's all to do with the location.

It will take a solid 14 hours to drive the road trip from Chicago to Mount Rushmore in the Black Hills of South Dakota before adding time for fuel, food, and rest stops. Take 3 to 4 days to explore the best of Iowa and South Dakota's wilderness.

The long drive may put many off going, but for real road-trippers like us, it presents an opportunity - a chance to hit the road and explore some lesser-known gems in this part of the country.

How Far Is Mount Rushmore From Chicago And How Long Will It Take To Get There?

Ok, so this trip isn't going to be for the faint of heart or those that aren't fond of being in a car. The distance from Chicago to Mount Rushmore is almost exactly 1,000 miles, so it's a trip you're probably going to want to break into stages.

Following the fastest route, the journey can be made in around 14 hours. However, that's almost exclusively on the freeway, with very little in the way of attractions to see along the way.

With that in mind, we're going to take a slightly different route that, while it will bump the traveling time up to 16 hours, will be much more rewarding overall.

The start of the trip is very straightforward. Head off on the I-88 where it begins and follow it to its conclusion, just before the Iowa state line.

From here take, take the I-80 west until you reach Omaha. Don't worry if it sounds like we've already been driving for an age - there's plenty of sights to see and stop at along the way, including the famous Iowa cornfields that we'll get to in the next section.

From Omaha, take the I-29 north to Junction City. This is where we get to see even more of the rural beauty of the area as we get off the interstate and join US-50, still going west.

Follow this until it meets the I-90, just outside Pukwana, which you'll follow almost the rest of the way to Rapid City.

From Rapid City, it's just a short trip to Mount Rushmore down US-16 and 16A.

Best Places To Stop Between Chicago And Mount Rushmore

So, while you could technically make the journey in one day, I think it's clear it will be more enjoyable to break it up into chunks and make the most of your time in an area you may not get the chance to come back to again.

Looking at the length of our journey, I'm going to break it up into three even parts.

The first stop on our list will have us staying in the capital city of Iowa, Des Moines.

There's not much to see between here and Chicago, so making the journey in one hit will give us plenty of time to explore the city.

A beautiful city that's often overlooked due to its location, Des Moines has plenty of things to keep you entertained for an afternoon. See the Iowa State Capitol, the Botanical Gardens, and the Kruidenier Trail Bridg, before relaxing in one of the many great bars and restaurants throughout the city.

Just a short drive south-west, there's also the town of Winterset, home to the birthplace of the legendary movie star John Wayne and featuring a museum of his life in the house he was born in.

As this is certainly going to be a trip to remember, why not do it in style and treat yourself to a stay in the Historical Oscar Lofquist House.

With a central location in Des Moines, you can stat in a huge apartment with luxurious furnishings, beautiful grounds, and stunning views to make you feel like Des Moines royalty and get well rested to prepare for the long road ahead.

Experience Life On An Indian Reservation

For many of us, life on an Indian reservation is something we won't really understand.

We'll have seen it in films and heard about it in the media, but until you've visited one, you won't get a true feeling of what they're actually like.

Considering our route takes us directly through the Yankton reservation, home to legendary figures such as Chief Running Bull, there will never be a better time to experience it than this.

See the stunning wildlife and beautiful landscapes, learn about the rich history and culture of the area and talk to the people for whom this is their lives.

An experience I thoroughly suggest everyone has at least once in their lifetime, you get to tick it off without even making a detour. Now that's a win if ever I saw one.

You even get the opportunity to stay in the Lewis & Clark Resort, which is located on the route of the historic Louis & Clark trail in the town of Yankton.

With beautiful spacious rooms and designed in the traditional style and culture of the area, it's the perfect way to ensure complete immersion into your experience.

A Not So Rapid Stay In Rapid City

The final stop on our journey, Rapid City, is great in its own right, but is often used as a place to stay on the way to other sights and destinations.

Within 50 minutes from the city is an incredible number of sights and attractions to see.

You have national parks, historic towns, tourist attractions, festivals, and even Mount Rushmore itself is less than 30 minutes away. If you wanted to drive a little further, there's also the site of the famous Wounded Knee Massacre under 90 minutes from the city.

With so much in the vicinity and all the time you've taken to get here, I'd highly recommend staying for at least 4-5 nights to make sure you don't go away feeling like you've missed out on anything.

With a longer stay here, you're also going to want to make sure you get your accommodation just right. Well, when you've traveled all this way to visit Mount Rushmore, it's only fitting to stay at The Rushmore Hotel & Suites.

Located right in the heart of Rapid City, this stunning hotel is ideal for when you want to come back after a long day exploring and unwind in luxurious surroundings with a drink or something to eat.

It's also perfectly situated for those who would rather get out in the city and experience what it has to offer of an evening.

So, we've said we're making three stops along the journey, but that doesn't mean there are only 3 things to see. It doesn't even mean we'll only be stopping for three nights.

There's plenty to do and see along the route, with some being short stops and others being locations you may want to spend more time in. Your own personal preferences will dictate how long you stay at each of our overnight spots.

With that in mind, some of the sights you can look forward to seeing along the way include:

While you can go at any time of year, as this isn't a beach destination that relies on the weather, you must be aware that the surrounding area operates on a traditional tourist season.

While it's certainly enjoyable to see the mountain without swarms of tourists all around, many of the attractions near Mount Rushmore will be closed. When I visited in February, for example, only one store was open in the town of Keystone at the base of the mountain.

With that in mind, if you're looking to experience everything the area has to offer, I'd suggest visiting at the start of August. Not only do tourists thin out just a little compared to the previous month, but it also gives you the opportunity to experience the Sturgis festival while you're there.

Perfect for getting everything out of an area that many will only get to visit once in a lifetime. 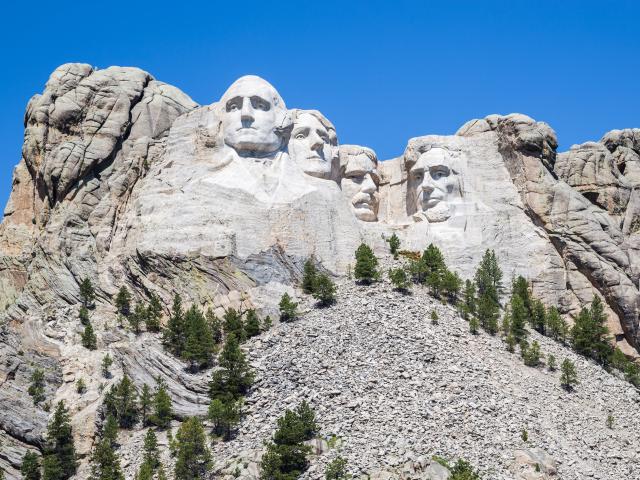